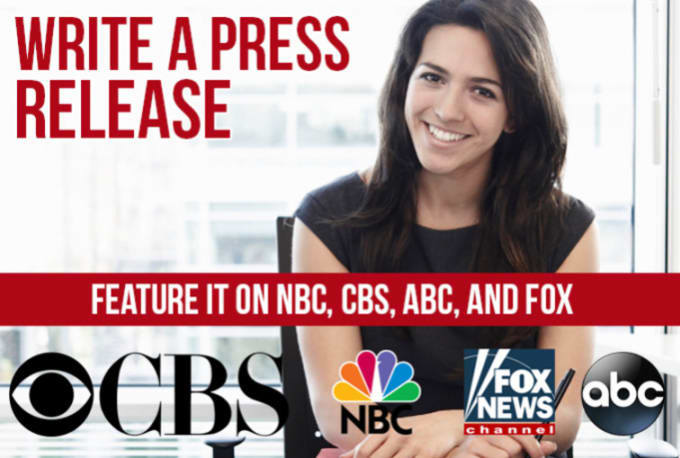 ✔ Get yourself featured in major News, Media & top publications of the world.

I'm a PR expert with extensive knowledge in Press Release writing and
distribution. I will write a professional press release and ensure it
features on affiliate sites of NBC, CBS, ABC and FOX. This will give you
the legal right to use the citation, "As Seen/Featured on NBC, CBS, ABC
and FOX".

This is what you will Get:

✔ We will write a 400+ words powerful press release about your product
service etc. It will be written by a US based writer with Journalistic
background or Experience with PR firms.

✔ We will send the Press Release to you for approval before publishing.

✔ We will also send financial feeds of your PR which appear in tickers,
sidebars, news feeds etc on many site like The Telegraph, Telegram, The
Sun etc. Please note that Financial Feeds doesn't appear directly on
sites. They appear on ticker, sidebar etc for some time only.

✔ We will send you complete report with all the 300+ links where your PR is published.

For the first time, I will publish press release on world's most Popular & Authority News Sites. I can guarantee publish of Press Release on MarketWatch.com. Be Proud to showcase
yourself as mentioned by Market Watch as well.
Buy this Gig extra to get Market watch with 300+ Media sites

IMP: The Following Niche's are not allowed: